By Keisha B. Ta-asan

THE PHILIPPINES posted its largest monthly balance of payments (BoP) deficit in 15 months in May, mainly due to the National Government’s foreign debt payments, the central bank said on Tuesday.

Data from the Bangko Sentral ng Pilipinas (BSP) showed May’s BoP deficit stood at $1.61 billion, widening from the $1.4-billion gap a year ago and the $415-million gap in April. 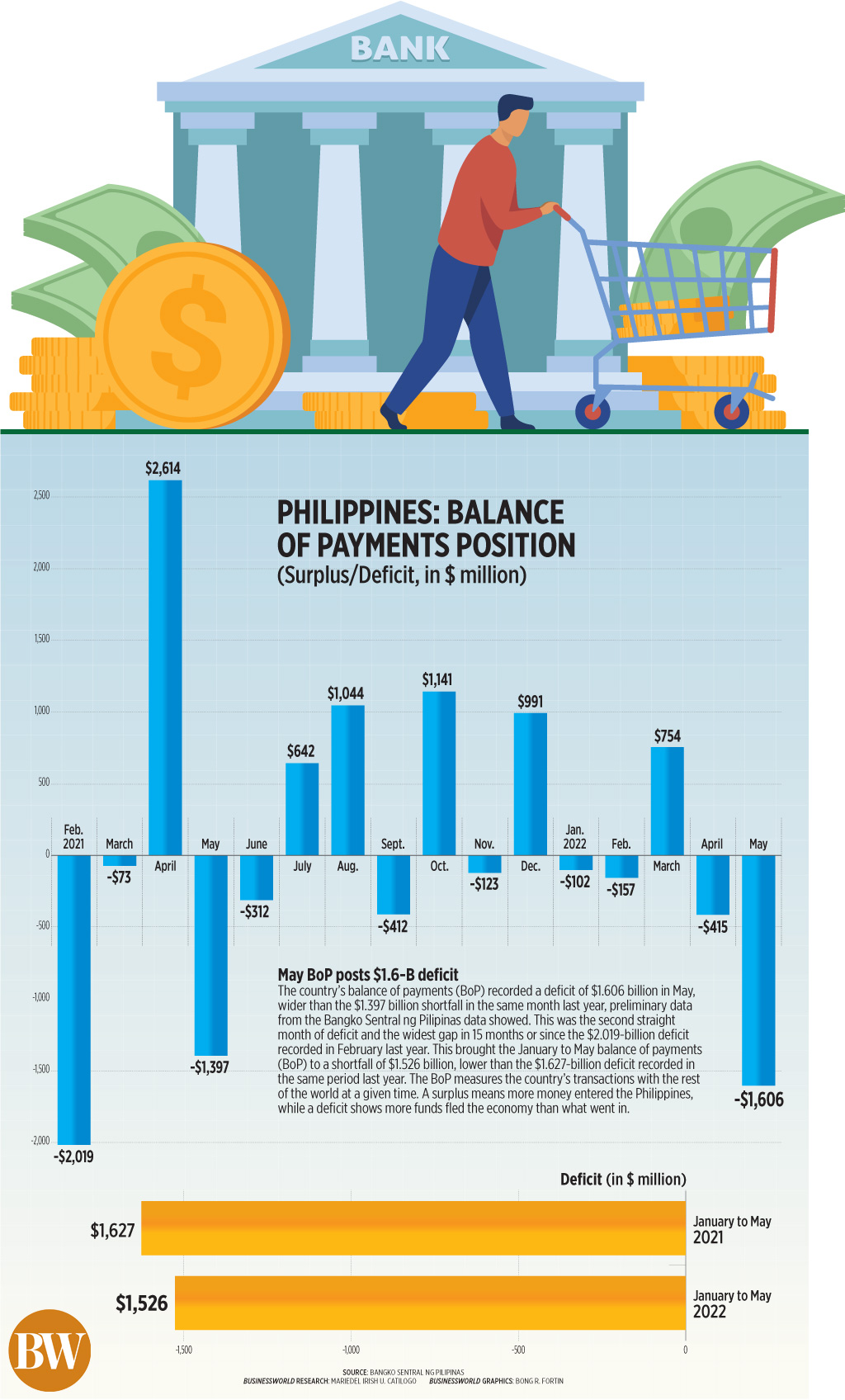 “The BoP deficit in May 2022 reflected outflows mainly from the National Government’s (NG) foreign currency withdrawals from its deposits with the BSP to settle its foreign currency debt obligations and pay for its various expenditures,” the central bank said in a statement.

The BoP gives a glimpse of the country’s transactions with the rest of the world at a given time. A deficit shows more funds exited the country than what went in, while a surplus means more money entered the economy.

“Based on preliminary data, this cumulative BoP deficit reflected the trade in goods deficit, which was partly offset by inflows such as from personal remittances, net foreign borrowings by the NG, foreign direct and portfolio investments,” the central bank said.

Latest data from the Philippine Statistics Authority showed trade-in-goods deficit stood at $4.773 billion in April, wider than the $3.098-billion shortfall a year ago.

“The latest GIR level represents a more than adequate external liquidity buffer equivalent to 8.7 months’ worth of imports of goods and payments of services and primary income,” the BSP said.

The GIR can also cover up to 7.4 times the country’s short-term external debt based on original maturity and 4.7 times based on residual maturity.

The BSP said last week it expects the country to post a wider BoP deficit this year due to a weaker global growth outlook that could affect trade and capital flows.

The country’s BoP is now expected to yield a deficit of $6.3 billion this year or equivalent to -1.5% of gross domestic product (GDP), higher than the previous projection of a $4.3-billion gap (-1% of GDP) announced in March.

Apple ready to bargain with its first U.S. store to unionize: source By Reuters